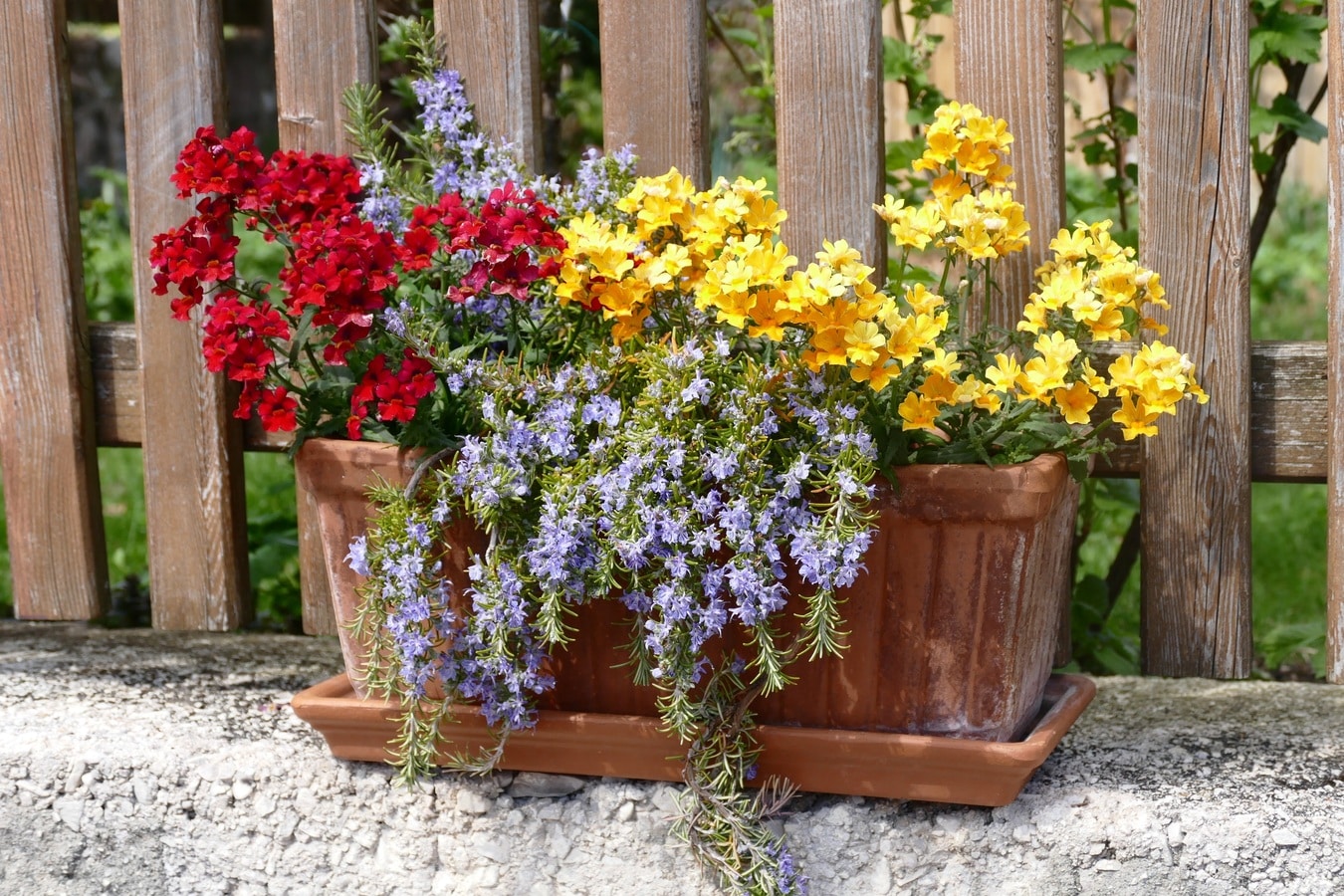 Did you know that there are many outdoor plants that can be grown in pots? And I’m not just talking about those that are small in themselves, like roses or bulbous flowers, but also some trees and even palms.

Today it is very easy to decorate the terrace or the balcony, for example, with a few plants. You just need to know which are the best outdoor plants which, due to their characteristics, can look great in containers. Here we will show you ten of them.

Important note: the plants we are about to discuss are suitable for outdoor cultivation in temperate climates; that is, in those where, in summer, temperatures can reach or slightly exceed 30 ° C, and in winter it is common to register frost. They are therefore plants that are resistant to cold and heat. 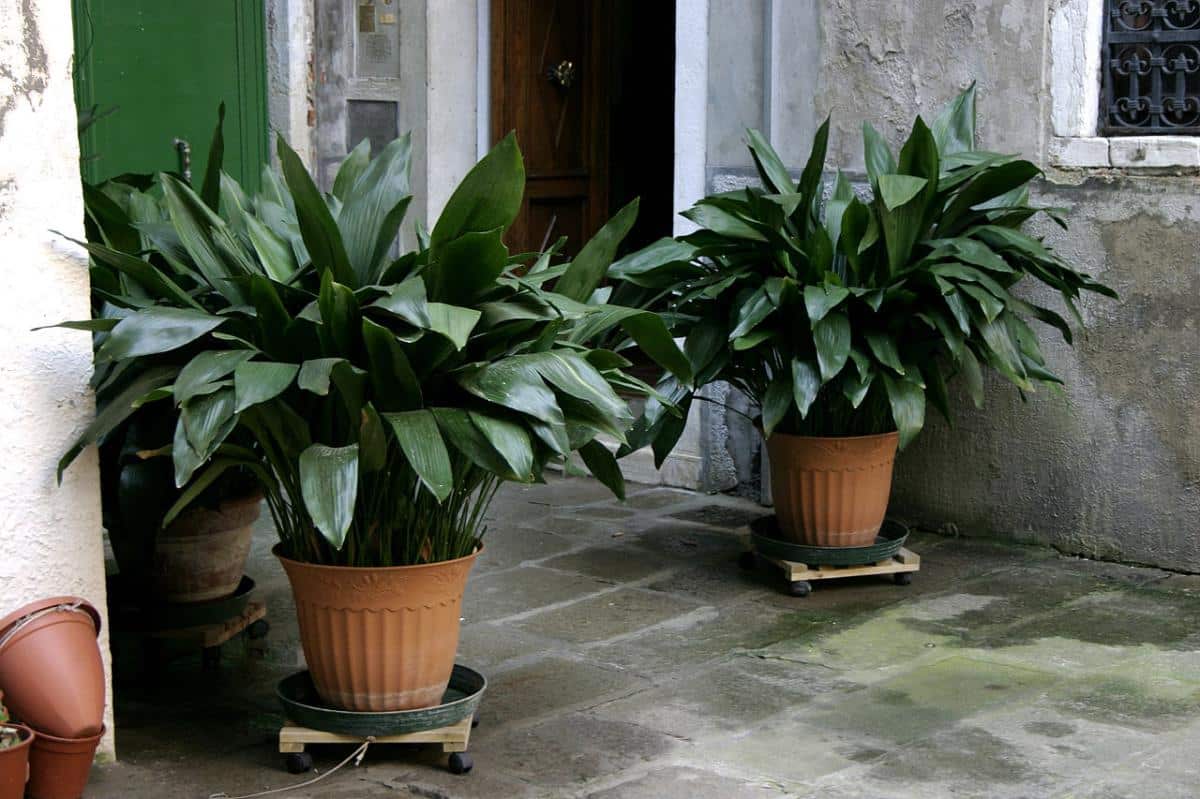 the aspidistra It is a rhizomatous plant that develops very long green or variegated (green and yellow) leaves., with a petiole also of great length. Although it produces flowers, they are very small and green, so it is normal that they go unnoticed every year. Although it may look like a fairly common green plant, that doesn’t mean it’s any less interesting.

It lives very, very well in pots, and also, it must be placed in the shade because it does not tolerate direct sun. That’s why it can be a great option for growing in areas not directly exposed to the king sun. Moreover, withstands cold and frost down to -12ºC.

the azalea It is a small deciduous shrub that reaches a height of about 1 meter.. It has small dark green leaves and produces numerous orange, white, pink or red flowers in the spring. Sometimes it is usually kept indoors, which is a mistake because it needs to feel the passing of the seasons. In addition, it resists frosts down to -7ºC.

It is a plant that requires an acidic substrate to grow, with a pH between 4 and 6; so you should not put any type of soil, but the one that suits it, such as coconut fiber or specific substrate for acid plants. 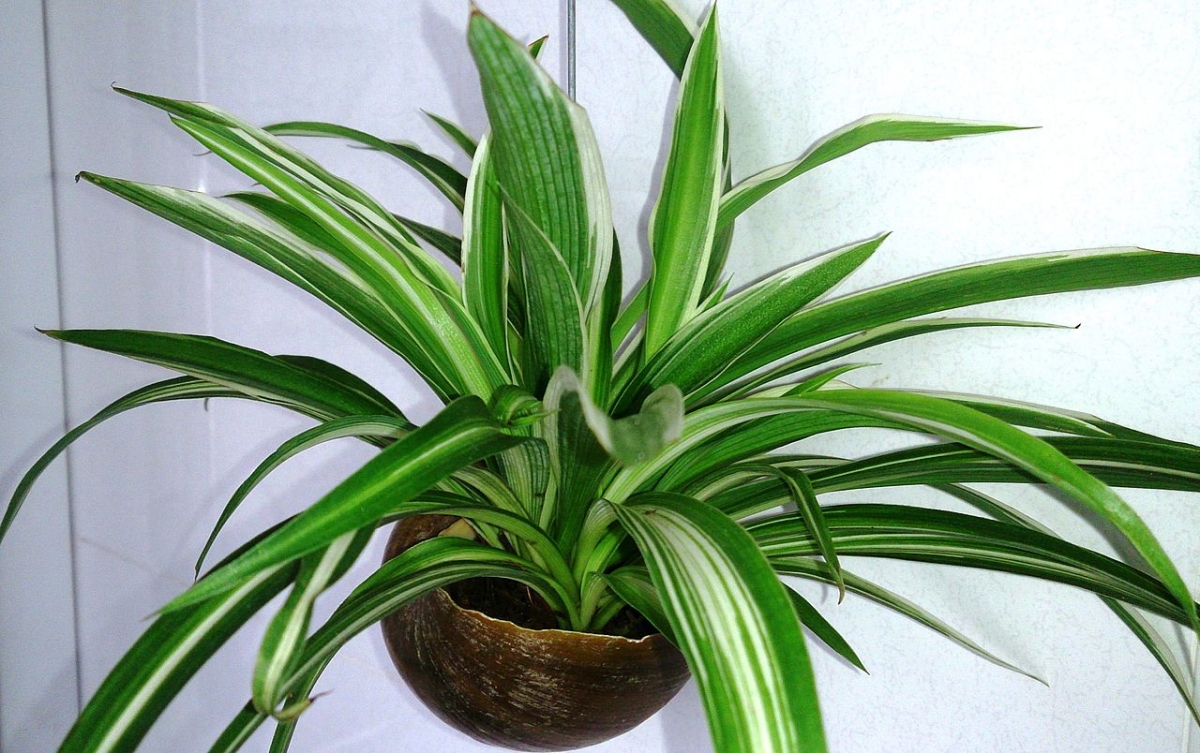 The tape, malamadre or spider plant, is a herbaceous plant that develops green or green and white ribbon-like leaves. It reaches an approximate height of 30 centimeters, which is why it can be potted throughout its life without any problem. It is also interesting to know that it can be used as a hanging plant, and that it likes both shade and partial shade.

It is very easy to maintain as it only requires moderate watering. Moreover, It supports cold and frost down to -7ºC.

echinacea or echinacea It is a perennial herbaceous plant that reaches a height of up to 1 or 2 meters depending on the species. It is a fast growing herb that looks great in pots, both on balconies, terraces and patios. Its flowers are large, pink and appear in summer.

It is easy to maintain, but it must be exposed to direct sunlight, otherwise it will not be healthy. Likewise, it should be watered when the soil is almost dry. But for the rest, you should know that frost resistant down to -7ºC.

The kumquat is one of the smallest citrus fruits that exist: They only reach a maximum of 5 meters in height if planted in the ground, and in a pot it remains about 2 meters.. It is an evergreen, slow-growing tree, or rather a tree-like shrub that produces white flowers in spring, and fruits similar to oranges but much smaller in summer.

Due to its characteristics, it often functions as a bonsai, but it is also a good option to have it in a pot as a small tree. Of course, put it in a sunny place so that it grows well. Frost resistant down to -7ºC. 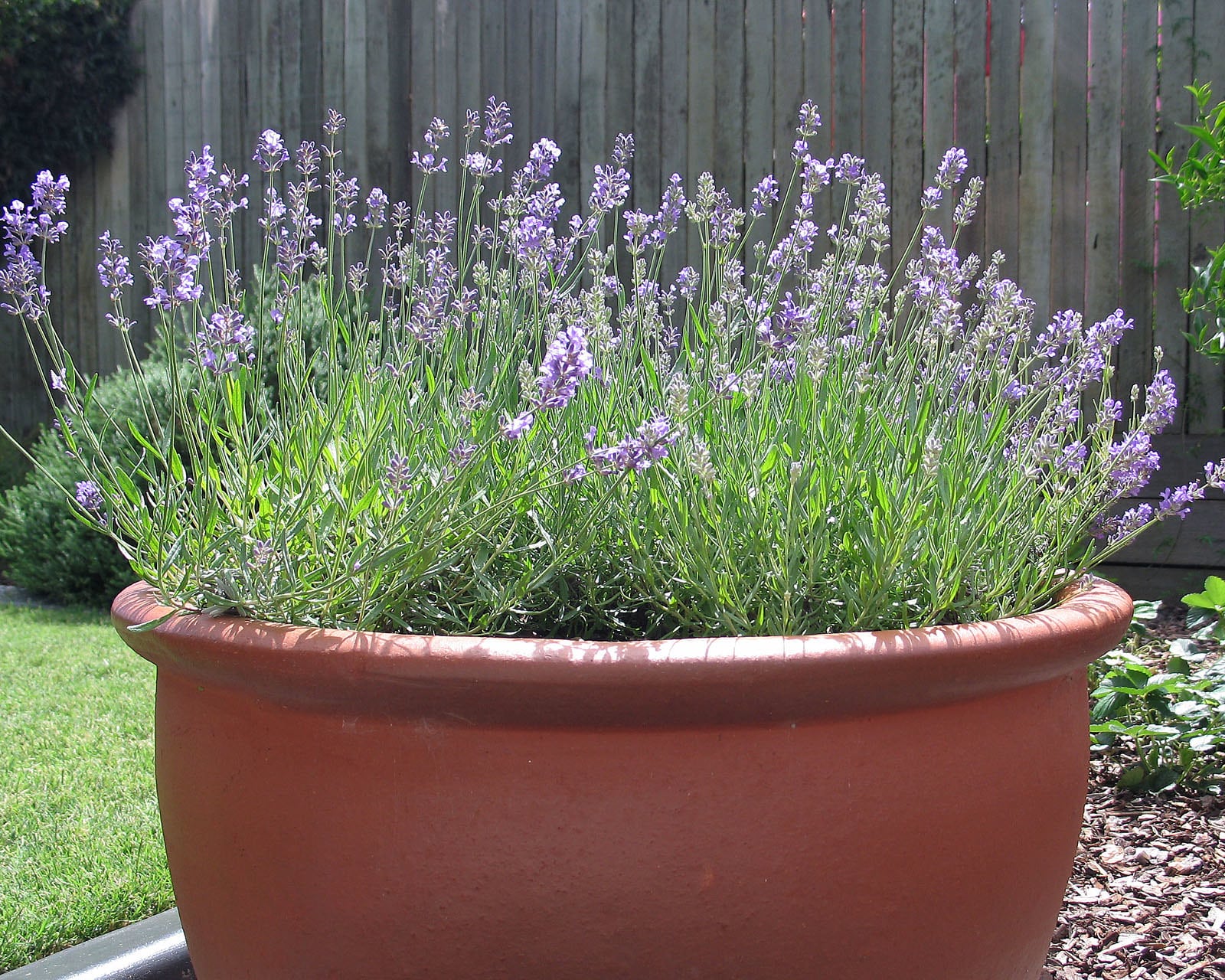 Lavender is an aromatic sub-shrub plant which, Although it can measure up to 1 meter high for about the same width, it adapts well to pot life. because, in addition, it tolerates pruning. It becomes especially pretty in spring-summer, that is, when it blooms, but it is actually interesting all year round. Since it is always green, it looks always green; And not only: did you know that it repels mosquitoes? The aroma that we humans like so much, these insects don’t like, that’s why they don’t go near it.

Likewise, it is important to say that it does not require much care: it repels mosquitoes, yes, but also many other insects that can quickly become harmful, such as scale insects, for example. Likewise, it does not need to be watered frequently, as it is drought resistant. Frost resistant down to -7°C. 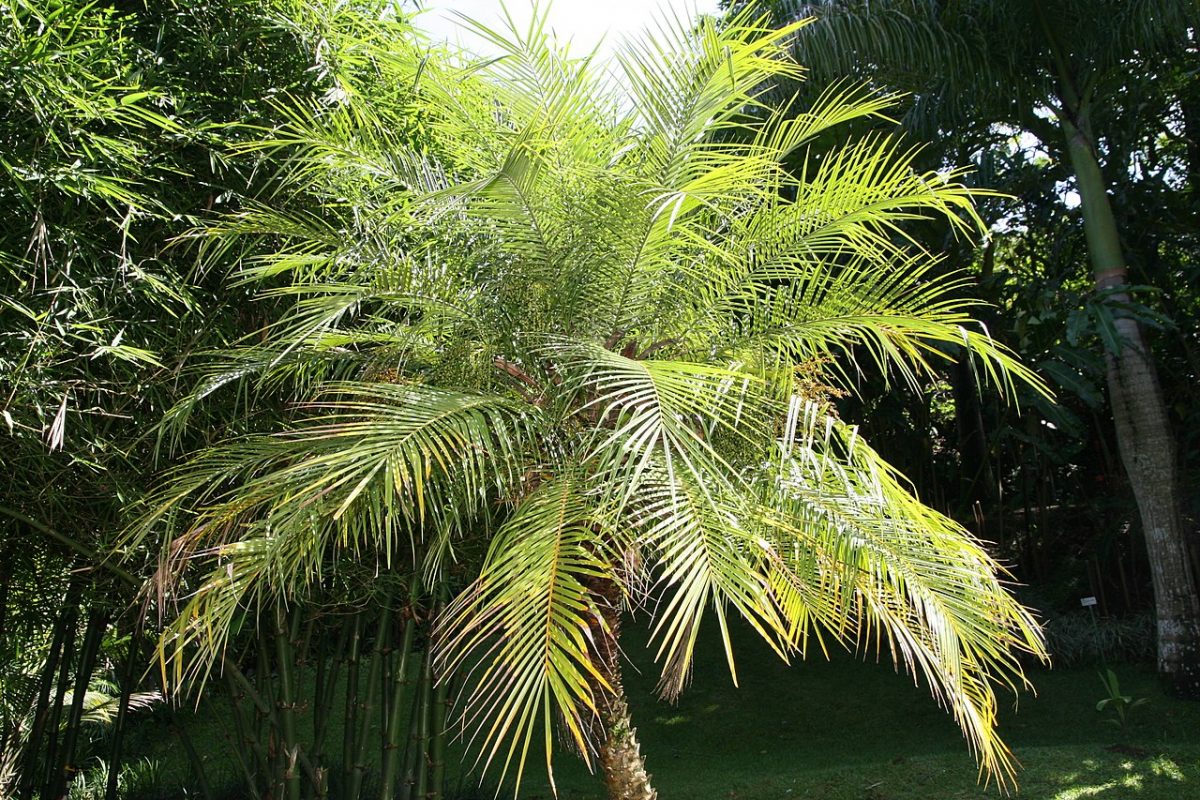 The saw palmetto is a rather slow-growing species of phoenix reaches an approximate height of 3-4 meters. It is a very pretty plant, with a slender trunk and pinnate leaves that can be placed in partial shade as well as in full sun. It can handle some drought, but I recommend watering whenever you see the soil drying out to keep it healthier.

If we talk about the cold, he supports it well. In fact, resists frost down to -4ºC as long as they are ephemeral and punctual. For the rest, if you like palm trees and want to have one in a pot, this is a good option. 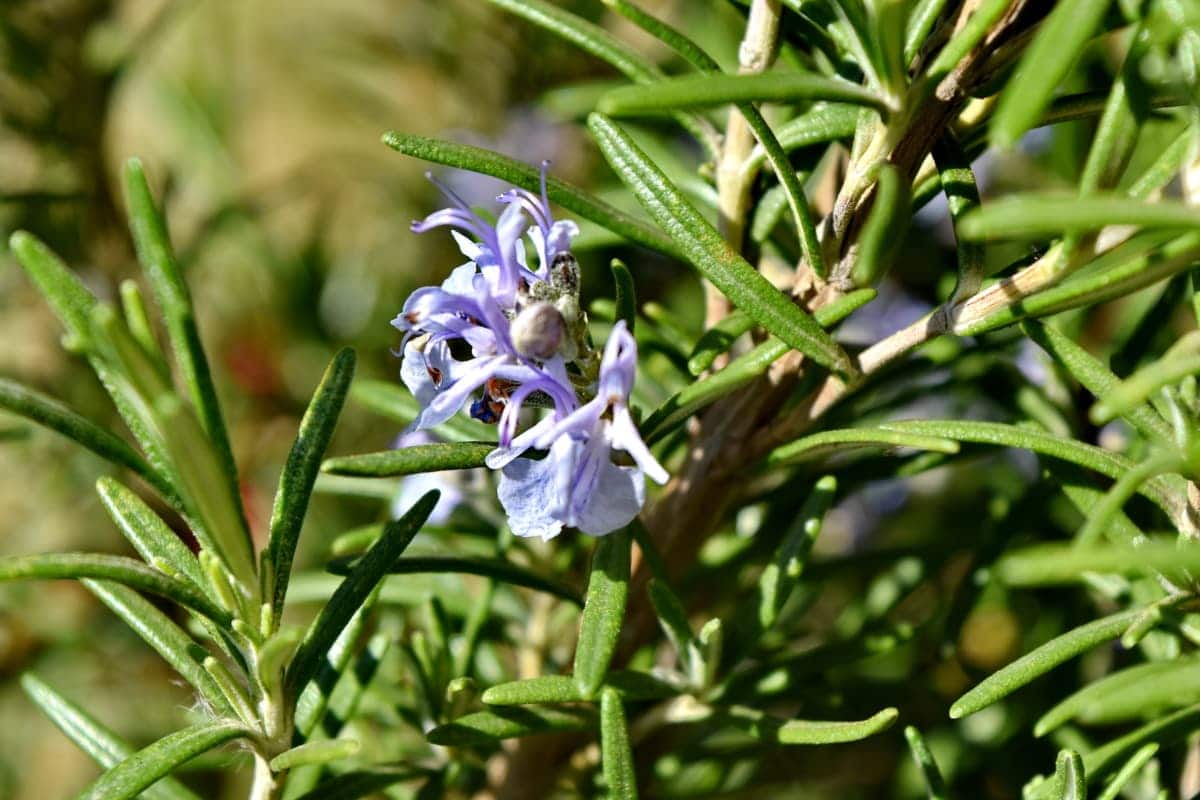 Rosemary is a bushy and aromatic plant that can reach 1 meter in height. It has linear, green and white leaves, and its blue flowers appear in spring. Its growth rate is slow, but withstands drought, heat and frost down to -7ºC.

It is a plant that you can have in a pot without any problem, which will surely give you a lot of satisfaction because it is very easy to grow.

the rosebush It is a plant, normally deciduous, much appreciated in gardens for its beautiful flowers.. Despite the fact that its stems are thorny -and that they can also do a lot of damage if we are careless- many of us grow one or another specimen, either in the ground or in a pot.

And it is not very demanding: it will suffice to give it a rejuvenation pruning in winter, and to eliminate the faded flowers. Of course, it also needs to be watered and fertilized during the growing season for it to grow properly. Withstands temperatures down to -18°C.

Teucrio is an evergreen shrub widely used in the creation of low hedges due to its tolerance to pruning. However, it is also highly recommended to grow it in a pot. It measures between 50 and 100 centimeters high., and has small olive-green leaves. Its flowers are also small and lilac in color. These grow throughout the spring.

It is a plant that should be placed in sunny places, and watered moderately throughout the year. If we talk about the cold, he supports it well; in fact withstands frosts down to -14.

Do you know of any other outdoor plants that can be grown in pots?